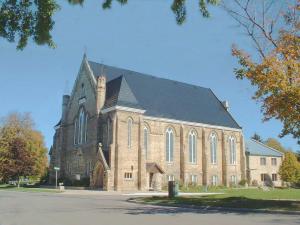 During the winter of 1850-51, Wesleyan Methodists held meetings in private homes at Kincardine, eventually constructing two small wooden chapels to house a membership of forty. The first pastor was Rev. Thomas Crews (1851 – 52). In 1856 a brick church was built, with the opening service held March 1st, 1857.  For a considerable time, the seating accommodation in the brick church consisted of rough two-inch planks supported by blocks of cord wood of the necessary height. There was one aisle, with women sitting on one side and men on the other.

Over the years, significant improvements to the church building took place. In 1929 the present organ was installed. During the period 1944 – 1951 many improvements were made, including a new pulpit, communion table & baptismal font, rebuilding of the organ and remodeling of the basement. An extensive renovation to the sanctuary occurred in 1962 and a large addition in 1992 (Learning Centre) was erected on the east side, giving our congregation an expanded facility to efficiently service our membership and outreach to our commu­nity.

Our church continues to be widely utilized by the congregation and the local community, endeavoring to fulfill its mission as a loving, hopeful and inclusive community of faith that nurtures Christian discipleship.

Around the World in Pictures